Sounding up Golden Trevally on a Humminbird Helix 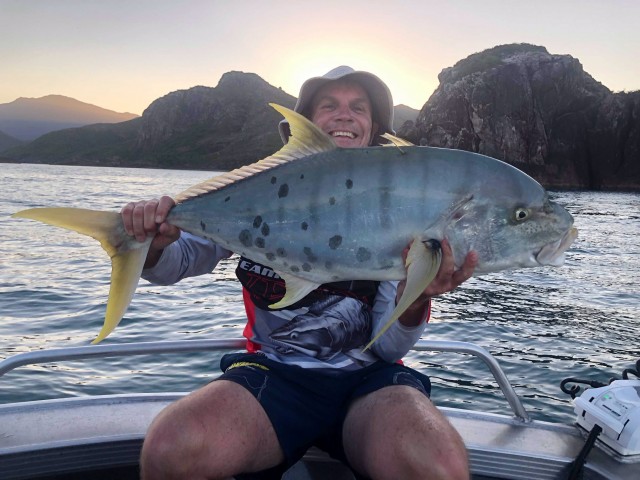 I recently did a trip to North Queensland on a fishing holiday with my family. The benefits of a quality sounder unit for any style of fishing can’t be underestimated and this was proven on this trip with many fish being caught as a result of finding them first by use of my Humminbird Helix sounder/GPS.

During this trip we were sounding past a rocky headland on one of the islands, in the Hinchinbrook region, basically admiring the amazing view and as always, I had my Humminbird Helix 12 switched on. A school of large fish on the large Helix screen caught my eye so we deployed the Minn Kota electric motor and spot locked on them. There were probably more than a dozen fish in the school, all stacked up close together, so hopes were high of some action.

We tied on some vibes and it didn’t take long for one of us to hook up and after a great fight a beautiful Golden Trevally was boat side. After a quick photo the fish was tagged and released to fight another day. Soon after another one was caught and released; both these Golden Trevally were around the one metre mark which were great fun to catch. Things went a bit quiet after this, so we continued our trip for the day to another destination.

For the next two afternoons we headed back to the same location and sounded around until a school of fish was located. The Humminbird Helix 12 was incredible allowing us to find schools of fish and even individual big fish sitting by themselves. Higher up in the water column you would see other big fish which turned out to be Spanish Mackerel and Giant Herring, we know this as we were able to target them knowing their depth and we caught both.

I guess the moral of the story is no matter where you are or what style of fishing you are doing it pays to both have a quality sounder such as the Humminbird Helix and always have your sounder on; you never know what you will see, find them fingers crossed, and catch!