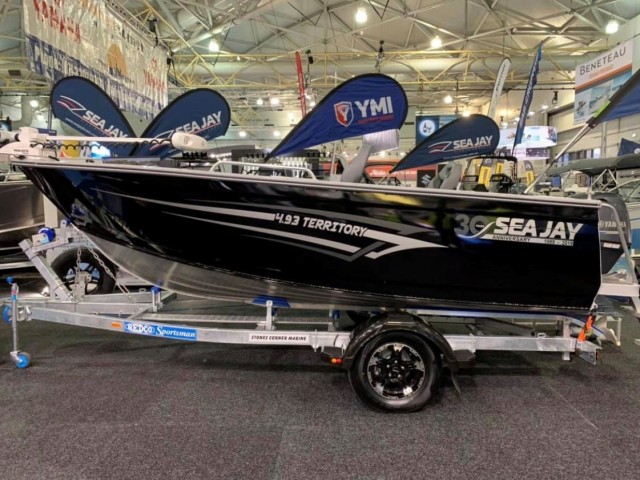 Sea Jay Boats have been manufacturing aluminium boats in Bundaberg Queensland for thirty years, their range covers car toppers to hard tops and in between there is an abundance of choice in tiller steer, side and centre consoles models.

Fifteen years ago Sea Jay launched a tiller steer model named Territory, it was unpainted, had basic pedestal seats, a large flat floor and casting deck that extended to the nose with anchor cavity under the deck. This model was extremely popular among the growing numbers of lure fisherman and ran from 2004 until 2014.

Well five years after the name and original model was fazed out, Sea Jay Boats has relaunched the Territory in a new configuration that we believe meets the market demand for todays lure fisherman. The Territory carries lots of similarities, the extended casting deck, the electric motor provision, the tough construction and lots of storage providing a clutter free fishing platform.

The major changes or enhancements include the side console, the full pod high back transom with boarding ladder, the port side horizontal rod storage and underfloor fuel tank.

Stones Corner Marine power the Sea Jay Territory hulls with Yamaha four stroke outboards and can fit them with Minn Kota, Humminbird and Garmin electronics and setup them up to tow on Redco or Sea Jay boat trailers.

For more information please contact the dealership 0n 07 3397 9766, visit our website at www.stonescornermarine.com.au or follow our social media posts on Facebook or Instagram. To view the new Sea Jay Territory you can also visit our dealership located in Brisbane at 117 Old Cleveland Road Stones Corner (Greenslopes).